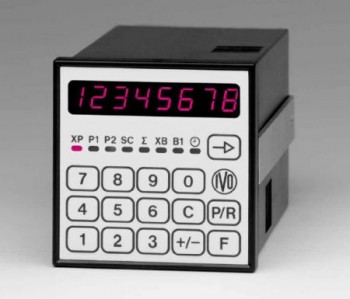 IVO multifunctional counter with two presets. Can be used in a wide variety of applications. Can be programmed as preselection counter, time counter, totalizer and more.

Description
The print manager enables a print protocol to be created on the PC by means of an editor. The protocol is transmitted via the serial interface RS232 to the NE213 and is stored there. After the transmission of the protocol, the connection to the printer is established at the same interface. The printer can be activated manually via the NE213 or by an electric signal.

Print protocol
A print protocol consists of all characters that are sent to the connected printer by the IVO counter upon activating the print function. These signs are grouped as follows:
control characters, text characters, counter data

Counter data
Counter data are display values of the IVO counter. To select the requested values, one only has to enter the respective line number with curly brackets in the editor.
Example: {02} (preselection P2
Specifications
Downloads
Datasheet NE213
Request Information / Quotation